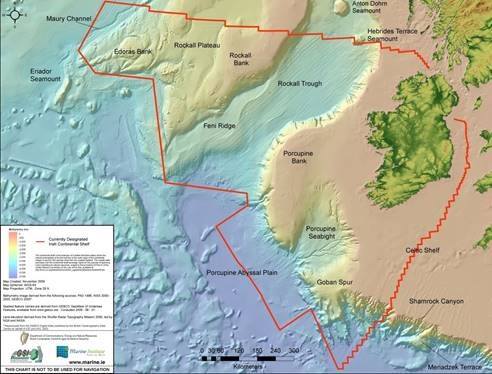 The Real Map of Ireland

What do you think of when you think of Ireland? A small island off the northwest coast of Europe perhaps. An island nation with a strong seafaring tradition. A country of rivers, lakes and sandy beaches, of high forbidding cliffs facing out to the ocean. All true of course, but would it surprise you to hear that the ‘real map’ of Ireland shows a territory that covers ten times the size of its land area! That’s right, once you allow for its seabed Ireland becomes one of the largest countries in Europe!

Under the United Nations Convention on the Law of the Sea (UNCLOS), the continental shelf of a coastal state comprises the seabed and subsoil of submarine area that extends to 200 nautical miles from its territorial sea baselines, or further if the natural prolongation of its land mass is beyond this. A coastal state exercises sovereign rights over its continental shelf for the purpose of exploring it and exploiting its natural resources.

Compiled by the Marine Institute and GSI Ireland, Ireland’s Marine Atlas is available online and allows us to view our marine territory which stretches over 220 million acres (880,000Km2). The red line on the ‘real’ map depicts the limit of Ireland’s territorial waters and Exclusive Economic Zone, which extend out across the North Atlantic Ocean and include parts of the Irish and Celtic Seas.

The Atlas is available for anyone to view online and allows you to see not just the extent of the seabed but also all types of marine data including archaeological sites, oil and gas lines, ocean features, fisheries and aquaculture sites, transport, infrastructure and lots more. A printed Atlas of our Deep-Water Seabed available from GSI gives us an exciting glimpse of the land that we’ll never get to walk and shows us that as well as the expected muddy seabed, we also have cold-water coral, we have rocks and cliffs underwater and down there, between the sea mounds there are even ravines that go 3000m down.

Where Rockall sits within the map is a slightly trickier subject, one perhaps best left to the politicians. One thing is clear, Rockall may be a tiny island in the Atlantic but according to the real map of Ireland, we are not!