The history of oysters being harvested in Ireland for human consumption dates back to prehistoric times.

Shell middens can be found all along our coast. They were created when the earliest settlers dumped the shells from the food they ate. Over time huge mounds of these shells built up. Some date back as far as 10,000 years ago! Here in Sligo we have a particularly impressive ribbon of middens at Culleenamore Strand. It runs for about 200m in length and up to 6m deep in some places. That’s how much the Irish once enjoyed shellfish! In an early example of sustainable practice these middens can provide higher ground for animals. More pertinently nowadays they can help prevent coastal erosion.

From the 1600’s native oysters were so common and plentiful that they were regarded as food for the poor. In larger cities were hawked by street vendors to passers-by. During the famine they were an important source of protein for the starving Irish. They only really came to be regarded as a specialty food in the later part of 20th century and their increasing scarcity fed into that attitude. 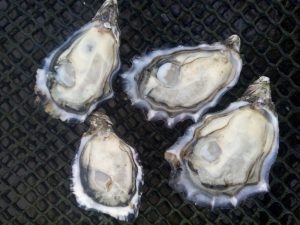 today’s growing interest in healthy and sustainable foods, the oyster is once again becoming a popular choice for many consumers.

So what makes the oyster so sustainable?

Firstly it’s the positive impact that they have on their environment. Whether you’re talking about native oysters or the farmed pacific oyster, their ability to filter the water in which they live is one of the most important ways that they improve water quality and the marine environment. Oysters don’t require any additional food input to grow big and meaty. Unlike a lot of farmed fish they can take everything they need from the water where they live. They also support a wide ecosystem of other organisms who live among them in bags or as reefs or in the nutrient-rich ground beneath the trestles, and benefit from the cleaner water they produce.

And it’s not just the positive impact that they have in the water that makes the oyster such a useful crop. Their shells are rich in calcium and when ground down can be used as grit for poultry or as drainage when mixed into soil for container planting. When not ground the shells can be used in agricultural and engineering projects, to create reefs or as a biomaterial for cement. We were interested to see in the September Issue of Conch Magazine that a number of companies involved in oyster shell recycling in France are exhibiting in Vannes this year and we wonder if there is the market potentially for a similar opportunity here in Ireland or the UK? 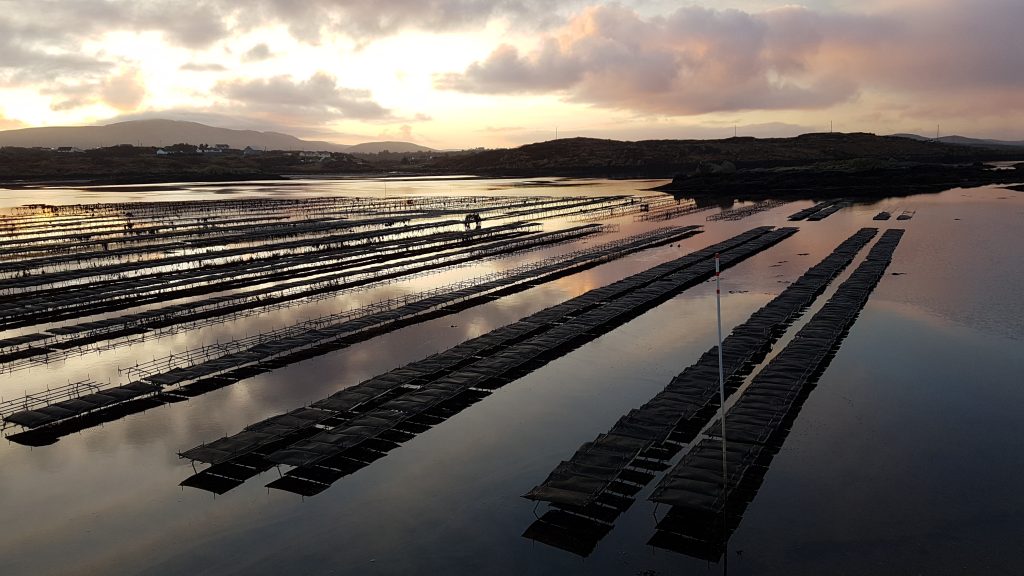 By 2050, the population of earth is expected to reach 9.8 billion, an increase of two billion people on the number today. An obvious question reading that figure is how are we going to feed those numbers sustainably? Traditional agricultural methods are not the answer. There are already serious questions being asked about the impact of land-based farming on climate change and biodiversity loss. Could aquaculture provide a solution? Does seafood have the potential to feed the growing world over the next 30 years sustainably?

We would argue that this is undoubtably very feasible. Oysters can be farmed on a relatively small footprint of land and gram for gram of protein they punch well above their weight compared to traditional sources such as beef or chicken. According to FEAP (the Federation of European Aquaculture Producers) aquaculture is the most efficient producer of animal protein as food.

This graphic shows you what is involved to produce 1kg of protein from each source. 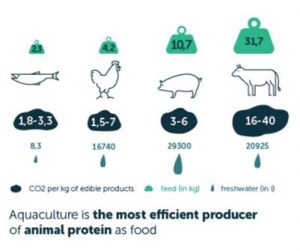 Protein is not the only health benefit of these delicious bivalves; oysters are low in fat and an excellent source of omega-3 fatty acids and vitamins D, and B12.

Fewer than six medium oysters will supply your daily allowance of essential minerals such as iron, zinc, magnesium, phosphorous, selenium, manganese, and copper. A more complete list of nutrients for a serving of 6 medium oysters is shown here.

And if you know that oysters are that good for both you and the environment then why wouldn’t you want to eat more of them and other sustainably-farmed seafood? Well of course you would!

A handy little guide to help you establish what seafood to buy is provided by the Marine Conservation Society who have developed an App called the MCS Good Fish Guide which available to download for free on the Apple and Google Play Stores. The App tells you which fish are good to eat, along with some suggested recipes for cooking them, and which to avoid based on whether they come from well-managed, sustainable stocks or farms.

And before you ask, yes, oysters are in the most sustainably farmed category. So you can be confident buying them at any time! 😊