Oyster Gardening began back in 2003 in Delaware when government grants allowed locals with waterfront property to raise small amounts of oysters in the waters that surround their docks.

Depending on where you live you could then either release the oysters back into the bay or harvest them for personal consumption. 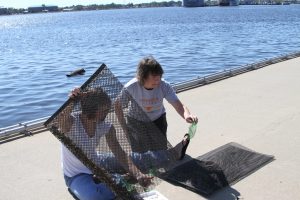 The background to the program

The American native oyster (Crassostrea virginica) has seen a catastrophic fall in numbers in the bays along the coast of Virginia and Maryland. This is due to in large part to decades of overfishing. While oysters have been harvested since the 1600’s, by the early 1900’s the numbers of native oysters left was beginning to fall dramatically and has only begun to improve in the last two decades as a result of stringent policing of fishing limits and initiatives such as The Chesapeake Bay Foundation’s Oyster Gardening Program. www.cbf.org

Of course, over-harvesting was not the sole cause in the decline in oyster numbers; disease played a part, poor water quality and habitat loss also had a role to play. As the population living along the waterfront increased the amount of runoff from the land left the water very rich in nitrogen and encouraged algae blooms. Taken together the situation had become critical by the start of the 21st century and that’s where the gardeners come in. 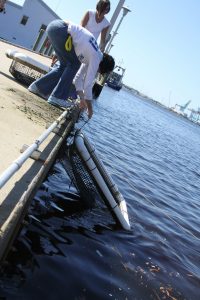 What’s the idea behind the gardening program?

Interested ‘gardeners’ (people with waterfront property) attend a short workshop where they learn about raising oysters and site considerations and are instructed in how to build a simple cage using pre-cut sheets of mesh and hog rings. Depending on what area they are in, or which program they are associated with, they then buy or receive around 2,000 spat. They take the cages and spat home and attach them to their docks, and in time (usually around 12 months) they bring the oysters back to be released onto sanctuary reefs. The adult oysters will remain on the sanctuary where they can improve water quality and provide marine habitats in Chesapeake Bay. Many of the gardeners have been raising and releasing oysters successfully for years.

It’s also a popular school project with hundreds of local schools gardening oysters as part of their science studies. They measure growth rates, mortality and water quality and learn the valuable lesson that what they do can have a positive impact on the environment.

Today a group consisting of community organisations, oyster gardeners, professional farmers, academic bodies and others have come together to form the Chesapeake Oyster Alliance http://www.chesapeakeoysteralliance.org/. The alliance has the ambitious stated aim of adding 10 billion oysters to the Bay by 2025 and claim they are well on track to achieve this target.

It’s a great example of private and non-profit organisations working together to improve their shared environment and also develop a commercial enterprise and create jobs.