What gives an oyster it’s unique flavour and what factors in the environment impact on its growth?

An estuary is a partly enclosed body of water where salt and freshwater meet and mix. This water is called brackish water. Many diverse habitats can be found in an estuary, including open waters, freshwater and saltwater marshes, sandy beaches, mud and sand flats, rocky shores, oyster reefs, sea grass, and adjacent upland habitats such as forests and grasslands. Since they are partly protected by land, they are ideal breeding grounds for fish and shellfish including oysters.

Castlemaine Harbour, Sligo Bay and Lough Foyle for example are estuaries and are therefore ideal as oyster habitats. Oysters thrive in brackish water from 60cm to 8 meters deep. They also love to live at the edge of channels due to the good water flow, which will bring them more food.

Salinity is defined as the total amount of dissolved solids in water. These solids are called salts and they account for approximately 3.5% of the ocean’s mass, the remaining percentage being pure water.

Salinity (the amount of salt dissolved in water) will vary in estuaries. Water closer to the mouth of the freshwater source will have a lower salinity, whereas water located nearer to the ocean will have a greater salinity. Salinity is measured as ppt (parts per thousand). Water having 10 parts salt to 1000 parts water is considered 10ppt. Below 12 ppt is considered low salinity, 12-20 ppt is medium and over 20 is high salinity.

On average, the Atlantic is the saltiest major ocean; surface water salinity in the open ocean ranges from 33 to 37 ppt (3.3–3.7%) and varies with latitude and season. This can be seen clearly on Ireland’s Marine Maps viewable on www.atlas.marine.ie where a line indicating salinity of 33 or 34 ppt surrounds the extent of the main bays (Galway, Sligo, Tralee etc).

The South Atlantic gets saltier and the excess freshwater is carried into the Indian and ultimately to the Pacific Ocean by the Antarctic Circumpolar Current. Both routes of water vapor, from the North Atlantic and from the South Atlantic, make for a salty Atlantic.

Most oceans and seas typically have no outlets. There are a few exceptions such as the Mediterranean Sea. It is much saltier than the Atlantic Ocean, but it loses some of its mineral-rich water through the Straits of Gibraltar. This increase in salinity occurs in all landlocked bodies of saltwater.

Evaporation of ocean water and formation of sea ice both increase the salinity of the ocean by reducing the amount of liquid in which the salt is dissolved. However, this natural increase is constantly balanced by processes that decrease salinity such as the continuous input of fresh water from rivers, rain and snow, and melting of ice.

Sea-surface salinity tends to be distributed in a zonal pattern around the world. The saltiest waters are at mid-latitudes where evaporation is high. Less salty waters are found near the equator where rain decreases the salinity concentration, and in polar regions where ice and their melt waters have a low salt concentration. 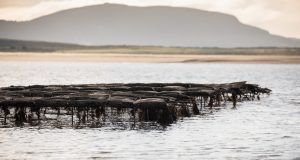 The optimum water temperature for oysters to survive is between 20-32 centigrade. Adult oysters can tolerate water as cold as 3 degrees and as hot as 48 degrees for short periods of time. In Ireland the water is too cold for spawning and so we buy in the seed from abroad for growing. Met Eireann records water temperatures around the Irish coast. Generally speaking, the water around Cork and Kerry in the southwest is the warmest being between 10 and 15 degrees centigrade. Along the north coast of Antrim it would tend to be 2 / 3 degrees colder than this on average. These temperatures are taken some distance from the shore and the estuarine water supporting the oysters would be warmer than this.

Dissolved oxygen is oxygen that is present in water and available for organisms. Oysters can tolerate lower levels of dissolved oxygen than some marine life. They can survive above 20% saturation whereas most marine life requires at least 30% saturation. Oysters require a certain level of health in their habitat for survival and specially to thrive and maintain the balance of the biodiversity of the ecosystem.

Shifts in temperature, current and environment affect an oyster’s salinity and overall flavour, as well as the particular mix of food that flows into the estuaries for them to eat. That is what defines an oyster’s meroir, the marine terroir and explains why oysters grown not very far from each other can have markedly different characteristics.