Bio fouling is the natural build-up over time of seaweed, barnacles and other biological growth on oyster bags.

If left unchecked can result in reduced water flow and micro-algae delivery to the shellfish. This will negatively affect growth rates and increase stress on your oysters. It can also impact on the look of the shell which presents an important aesthetic consideration given the nature of the market for oysters.

Preventing or reducing bio fouling is therefore an important consideration for any shellfish farmer and there are a number of ways that it can be addressed.

A popular method to control fouling is to allow the bags to dry naturally onshore. As the marine organisms that cause the fouling cannot generally survive out of the saltwater this is quite effective. Once the seaweed etc has dried out it can be brushed off using a wire brush or similar. While arguably the most effective method of fouling control, it is without doubt also the most labour intensive. What is more if the material that is removed is not dealt with in a satisfactory way it can negatively impact on both the appearance of the farm and the general odour which should be a concern where the public have access or view over the site. The trestles themselves can be cleaned down quickly and efficiently using the trestle cleaning tool.

Flipping the bags while they are on the trestles can expose the fouling to the air and, depending on the conditions, give an opportunity for it to dry and be removed. Drawbacks to cleaning off the fouling in situ would include concerns that what is removed falls back into the water and can float with the current to a neighbouring farm where it can reattach itself. Alternatively it can settle in the water below the trestle and as it decays create problems for marine life and growth in that area.

Another control practiced is removing the bags from the water and dipping them into a brine dip made up of diluted vinegar or acetic acid. This can be effective in estuary farms where there is a supply of fresh water to wash through the farm but may be difficult to work successfully without a freshwater supply.

A solution for dealing with bio fouling within the bags is to add Littorina littorea to the bags. A controlled test in Maine, USA in 2016 investigated 3 different quantities of winkle per bag; 25 (low), 50 (medium) and 100 (high). Over a period of 3 months it was found that the high concentration of periwinkles resulted in a 25% increase in the growth rate of the oysters. On the other hand the bio fouling on the bags themselves did not appear to be impacted to any particular degree by the presence of winkles in the bags.

Power washing is a solution used by some growers to clean off the fouling once the bags are empty. Fresh water and pressure together can be quite effective to strip back growth.

A number of trials have taken place both in Europe and the US to investigate a chemical solution to the problem of fouling. This has involved both pre-treating the bags before use as well as ‘painting’ the bags with various chemicals while they contain shellfish. We are not aware of any chemical solution that addresses our concerns around using chemicals on a product which is routinely consumed raw, or on their impact on the broader marine environment. With consumers increasingly choosing natural products and growers here in Ireland signing up to initiatives like Bord Bia’s Origin Green program a chemical solution is not to be encouraged. 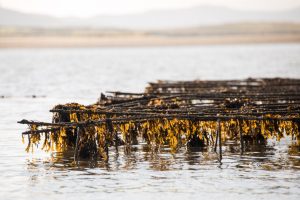 At the end of the day none of these methods is perfect and as a result oyster bag manufacturers, Universities and various other industry groups continue to research more successful and less labour-intensive methods for controlling fouling.

Until such time as a solution is found the current answer seems to be a combination of air-drying, power washing and good old-fashioned elbow grease but mainly not allowing the fouling to set on the bags. Regular attention will limit the ability of the organisms to set on the bags and in the long run will save you time and energy.

Considerations to bear in mind when dealing with fouling