Love them or loathe them oysters are fascinating (and delicious!) creatures. Evidence suggests that we have been eating them since Neolithic times and as recently as Victorian times they were so common as to be considered food for the poor!

But did you know:

An adult oyster can filter up to 50 gallons of water a day, around the amount of water that would fill a bathtub. They feed by drawing water through their gills and removing micro particles called phytoplankton and in doing so clean the water around them and therefore play an important role in the ecosystem.

2. Oysters are hermaphrodites and can change their gender through their lives.

Most will start out male but after a couple of spawnings can change to female. They reach maturity in one year and as males they spawn by releasing sperm into the water. As they grow to 2 or 3 years old, they can then spawn as females by releasing eggs into the water.

To ensure their survival release enormous numbers of sperm and eggs into the water (where the gametes mix and form oyster embryos). Each season a female oyster can release 5 to 8 million eggs at a time and the male adults release even larger quantities of sperm. The mind boggles.

Pearls are produced when a grain of sand or other irritant finds its way inside the pearl oyster’s shell, usually when it is opening and closing to filter water. The oyster produces layers of ‘nacre’ to coat the irritant and this forms the pearl.

5. You can eat oysters all year round.

And they’re so good for you why wouldn’t you? They’re high in zinc that we all know is so good for our immune systems, as well as calcium, vitamin C, omega 3 fatty acids, iron and protein.

6. All you need to enjoy an oyster is a knife.

Oysters can be enjoyed raw, just as they are and straight from the shell. Of course, they’re great with dressings too, or wrapped in bacon and grilled for a completely different taste experience. 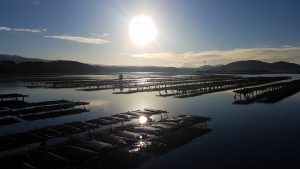 7. The flavour of the oyster is strongly influenced by the water and environment in which they live.

Tides, rainfall, temperature, the algae they feed on; all these elements impact on flavour meaning that neighbouring farms can produce oysters with widely differing flavours. Similar to ‘terroir’, the word used to describe the unique flavour profile of a wine, we describe the flavour of oysters as ‘merroir’ borrowing the word ‘mer’, the French for sea.

8. Oysters are finding it harder to grow their shells.

The increase in seawater acidification as a result of the oceans absorbing more carbon dioxide is having a negative effect on the oysters’ ability to spawn in the wild or to form shells.

Oysters have small hearts with 3 chambers which pump colourless blood around their body.

10. The average oyster can live for about 6 years in the wild.

Oysters growing on reefs and in the wild generally live to about 6 years old although some have been found that are up to 20 years old. Oysters tend to grow about 1 inch a year, the ones that you buy for consumption tend to be about 3 years old so are approximately 3 inches long.

11. Oyster shells can be recycled.

Oyster shells can be used in construction projects to build up the ground, they can be ground up and, as they are full of calcium, they will strengthen your compost as well as being great to add to chicken grit. In areas where natives are growing, they can be used to establish reefs for the oyster spat to settle on.

12. There are only 5 species of oyster in the world.

13. Oysters being aphrodisiacs is an old wife’s tale, sorry!

While Casanova is said to have eaten 50 oysters for breakfast each morning to keep him in the mood, we aren’t sure their reputation is based in scientific fact. Oysters contain zinc which is known to aid the production of testosterone, and phosphorus and iodine which may help with stamina but beyond that there is little evidence to back up the claim.